Purchased 2 Extra Heavy Duty Antenna Studs and a 5ft Tunable Firestik Antenna. Received in excellent time and condition. Bought my Galaxy 959 from them a while back and it's still working great. Highly recommend RCR for your radio needs.

What most impresses me is the quick shipping…which is completely understandable since you use a FJ40 as part of your service!

I purchased a President radio from these folks, that they shipped out immediately, and was recieved by me in just a couple days. They follow up to make sure everything was satisfactory with the purchase, and I'm sure any problems would be handled right away. I would have no reservations about ordering from them again, and will check with them first for any future needs.

Received my Firestick NGP antenna kit and l am very pleased with the great price and quality. Great service with the help and knowledge in buying just what I needed. Fast delivery.

Very pleased with everything from your company.

A
Right Channel Radios A.K.
This company is top notch

I bought two antennas for my Jeep Wrangler from their website. Not only did they provide videos on how to put them together, but they also called me up when they noticed that I didn’t purchase a critical part. 5 stars to them for being on top of their online purchases.

Excellent service & follow up.
Much appreciated!
My only gripe is my local USPS!
Negative 2 stars!

After several decades of CB radio I am moving over to GMRS. Right Channel Radios provided counsel, expertise and, soon, help with installation. It's like being right there in person, even if we do this all on line. Thanks guys, great service.

Across the board Right Channel has good products. What sets them apart, in my considered opinion, is their outstanding Customer Service! Just great folks. Thank you, to ALL of you.

Roof mount Stryker antenna has a 1.4 SWR across the bands for my Truck…at the time the price was right …thanks

I have a Polaris RZR and Right Channel hooked me up with the complete set up for my SXS.

I found Right Channel Radios while searching online for a new radio for my truck. Really quite happy that I found them! Their selection of great radios, at least in the CB and GRMS genres is outstanding. That and their Customer Service is second to none. I’d like to suggest that, if you are looking for a CB or GMRS radio you have come to the right place. I have already purchased from them multiple times AND recommended them to my Son. Go ahead. Do it! You will not be disappointed!

I wanted to order the Midland 75-822 cb. They were out of stock. I emailed them to inform me when the CB would be back in stock. Not only did I receive an email I also received a phone call from Eva that the radio was back in stock. Great radio, Great people!

A
Right Channel Radios Angela
Service with a Little EXTRA!

Ordered an antenna from thee fine people and was very happy with the correspondence, tracking and fun, creative emails I received from them when my package was en route. Would definitely consider them a top source for all things CB!

Not only do they have a great selection of products but they are knowledgeable and quick to answer questions. They put effort into little things like their order confirmation e-mails that give you a good feeling about doing business with them.

I bought a lot of radio equipment from this place and never had a problem with any of them.
From antenna's, mounts, meters, etc.

Excellent company had the parts I needed expedited the shipment

I'm super happy with the quality of the products and Right Channel's customer service. Very rare in ghis day and age. I'll definitely continue being a customer.

From the emails and the things that they sell you can tell this is a quality company, very enjoyable experience buying from them :) 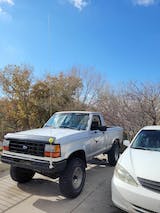 I placed my order and received faster than I expected it

I called right channel, after trying every other internet listing for firestik antennas, looking for an FS99-W to repair my solarcon imax 2000, that lost its top section in hurricane Ian. I spoke with her, told her I’m looking for an antenna that nobody has or can get(basically looking for a unicorn!)

I get a text message about 15 minutes after speaking with Eve, and a call a moment later, and not only had she found my “unicorn”, she was almost as happy as I was! When she told me in an excited voice she had an FS99-W for me, I said let’s do business, and my antenna showed up in USPS a few days later! That’s how regular Eve, became “Eve the Awesome” overnight!